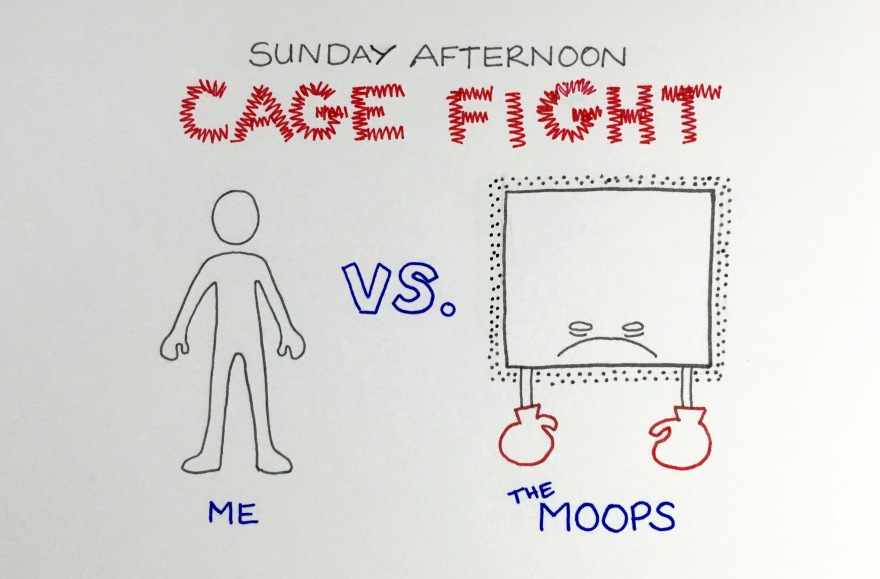 Douglas Adams called them “the long dark teatime of the soul.” The time of day when the weekend is mostly over and you can feel your remaining free time shrinking. The harder you grasp at the precious minutes, the more quickly they leak away. A debilitating ennui mixed with depression and spiked with anxiety sets in and can only be relieved by the oblivion of sleep.

When my boyfriend and I lived in South Korea, our apartment backed up to a mountain dense with trees. In the late afternoon, the sun would lower just behind the mountain. We called that time on Sunday afternoons “in the shadow of the moops.” We left the mountain when we moved back to the U.S., but the moops came with us.

In our continuing battle against Sunday moops, we have deployed many strategies/coping mechanisms/distractions:

These strategies have had varying degrees of success, but since most of them involve high-calorie consumption and not moving, they aren’t super healthy. The last thing either of us needs regularly is to throw food guilt coupled with weird body-feels stuff on top of the Sunday moops.

Then we came up with a solution: games.

We started with tablet based video games and really got into Puerto Rico. We played that until the way to win was too obvious and it got a little boring. Then we bought a PS3. Matt liked Uncharted 2 and I was into Journey, but we found the action and emotional intensity of the game console experience to be too much for Sunday afternoons.

After watching several episodes of the web series Tabletop hosted by gentleman geek Wil Wheaton, we decided to give board and card games a try. We thought the lack of sound effects and shooting things might help, and the strategy elements of the games sounded pretty cool.

We got our Magic: The Gathering decks and began the epic journey of muddling our way through the complexities of game mechanics (still working on remembering the phases). Recently, we tried Between Two Cities, a board game where we get to be city planners (love it). We’ve also tried Superfight and Tides of Time, two interesting card-based games. I’m intrigued to play Morels (a card game about mushrooms), Alhambra (a palace building board game), Tokaido (a traveller/tourist board game), and Settlers of Catan (the classic resource management board game).

Tabletop games turned out to be the right call. When we play, I feel the balance of engagement and relaxation we were looking for. The games have helped us to skim right over the Sunday afternoon moops and slide into the evening without the repercussions from too much food, alcohol, or walking.

I haven’t given up on the PS3 yet, and we found LittleBigPlanet to be engaging and a bit less intense. I’ve solo played Fez and enjoyed it, and I want to improve my console controller skills so I can play Braid and the upcoming The Witness. In the smartphone game realm, I played 80 Days obsessively over Thanksgiving in between family events, and I highly recommend it. I think the less stressful I find the gameplay experience, the more likely I am to reach for a video game if I want to chill.

I’m proud that we figured out a way to reclaim Sunday afternoons and have some fun too. In our ongoing battle with the moops, games have proved to be a powerful ally.