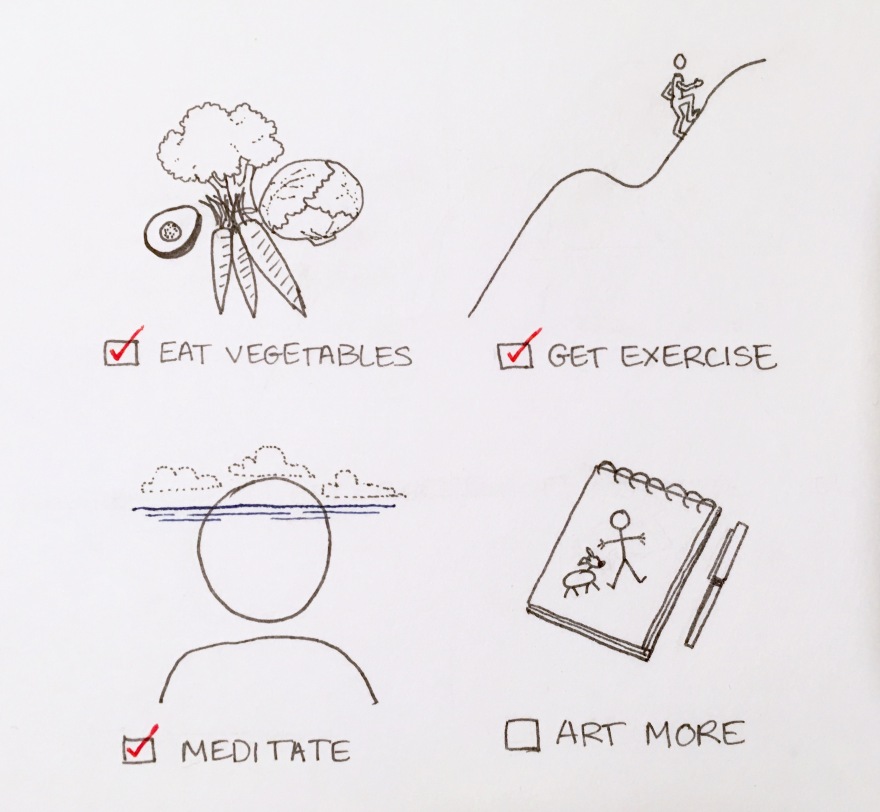 The new year is a month away, and I’m already eager to jump into self-improvement planning.

Knowing my propensity for Virtuous List Making and High-Bar Setting, I’m approaching my shiny new routine desire cautiously while brandishing a long pointy stick. I could wait for 2016 and start a huge pile of new things, as I’ve got three or four ideas nibbling around the edges that I would love to start. Instead, I’m going to begin a few projects now and establish some reasonable production habits I can add to later, if the new year’s urge is too powerful to ignore.

I have three primary goals for December:
1. Put the now-completed ON THE ICE up for sale on Amazon by mid-month.
2. Spool up feature writing through Medium.
3. Draw and post regularly on Tumblr.

There are a number of steps to the Amazon publishing process, but it shouldn’t be a huge time suck after I get the book up there. I’m not looking forward to all the fiddly details of getting it done, but I want to push through the aversion. I think it will be interesting to see what happens when I try to sell something I made.

Doing more feature writing is the goal I’m most nervous about, because I’m trying to establish it as a continuous habit. I’ve been kicking around the idea of submitting personal essays to literary publications for a few months. I made some tentative forays, but was finding it difficult to follow through. I fretted over publications’ chosen topics or styles and worried my writing wasn’t a good fit. My eyes glazed over at the submission guidelines and long response times, and I put off sending something again and again. If I looked around more, I was sure to find a publication that was exactly the right one, right?

The answer turned out to be yes and no. I have found some publications that would be cool to write for. However, I realized my submission hesitancy was due to a lack of confidence in more public essay writing (more public than this blog, anyway). I needed to understand better what I wanted to write and how I wanted to write it, before I started worrying about whether or not publishing people would like it.

Hence, Medium. My plan is to post two articles each week on art and/or food, once on Tuesday and once on Friday. It’s scary, but doable. When I started writing regularly on the blog, I was terrified to post things. Then, I made myself post almost daily for a month, and I stopped being terrified. I figure this strategy will help me corner the fraidy-cat and keep it from running rampant.

The third goal is to establish a regular drawing practice. Drawing uses a different part of my brain than writing, and it helps me relax. It has a number of parallels with meditation, as it both rejuvenates and strengthens me. Plus, drawings have the added bonus of being finished creative work. That way I don’t have to stamp down the completionist part of me all the time.

I figure three goals for December isn’t too crazy, even with all the holiday-ing that will also be going on. I’m optimistic.